Nazir Abbas: “I was staying at the guest house of Kara-tunga Tours when I noticed a striking young man having tea next to the cozy fire. He caught my attention and we started chatting. His name was King and he was part of the Karamojong tribe. Fascinated to learn about their culture, I started asking him loads of questions, and he was a wealth of information and easy to talk to! He shared that the next day, there was going to be a ritual ceremony and sacrifice and invited me to partake.” 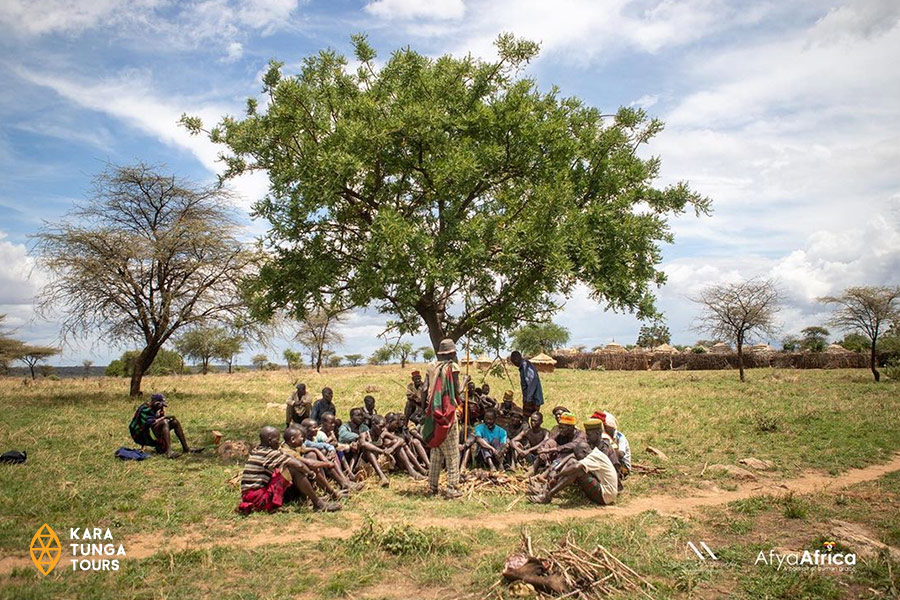 We walked outside to the area of the tribe’s holy tree, a sight in itself, where I saw the elders gathering along with other young men. For the ritual ceremony, an animal sacrifice was needed, traditionally a goat.

There were 5 elder men sitting in a semi-circle under the tree. This tree was a place of worship – there is no traditional religious structure in which they congregate. Each elder held his own spear considered regalia for the ceremony. 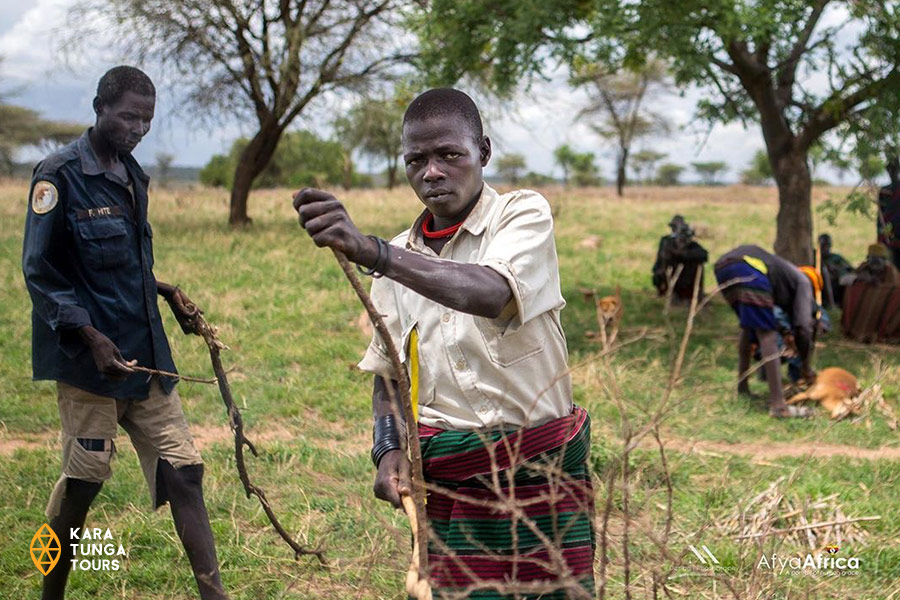 The animal is to be sacrificed using a spear rather than a knife. Young boys collected wood and made a beautiful, blazing bonfire. Fire represents many things to peoples and cultures around the world – illumination, destruction, spirituality. As the flames of the fire danced, I became hypnotized and felt as if I was in another realm. The fiery orange and yellow sparks drew my attention, and the blur of the smoke and smell created an aura difficult to describe. 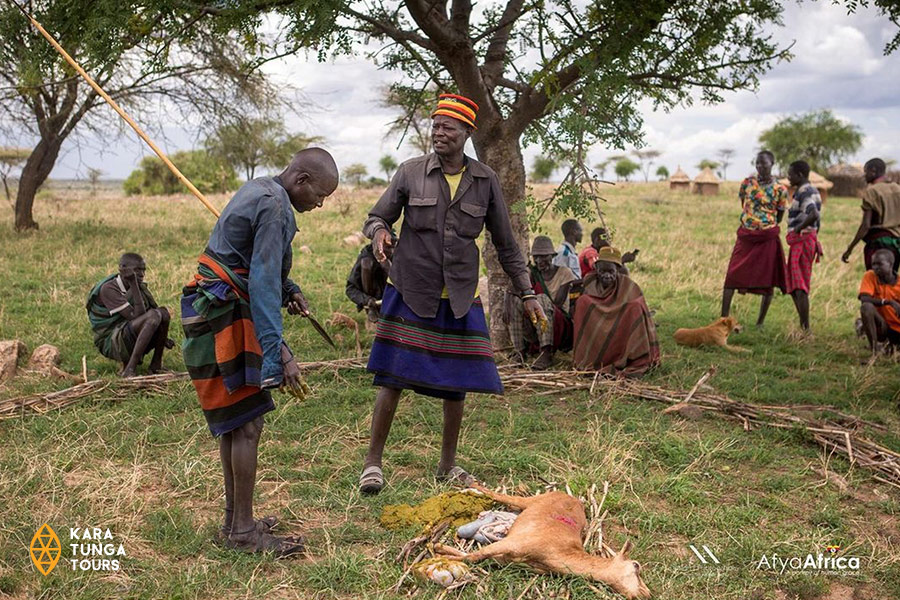 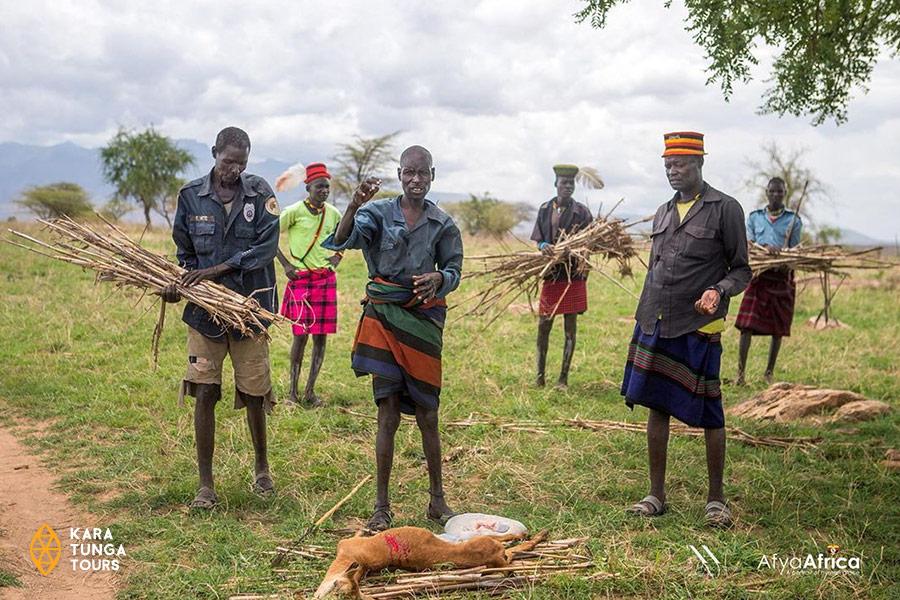 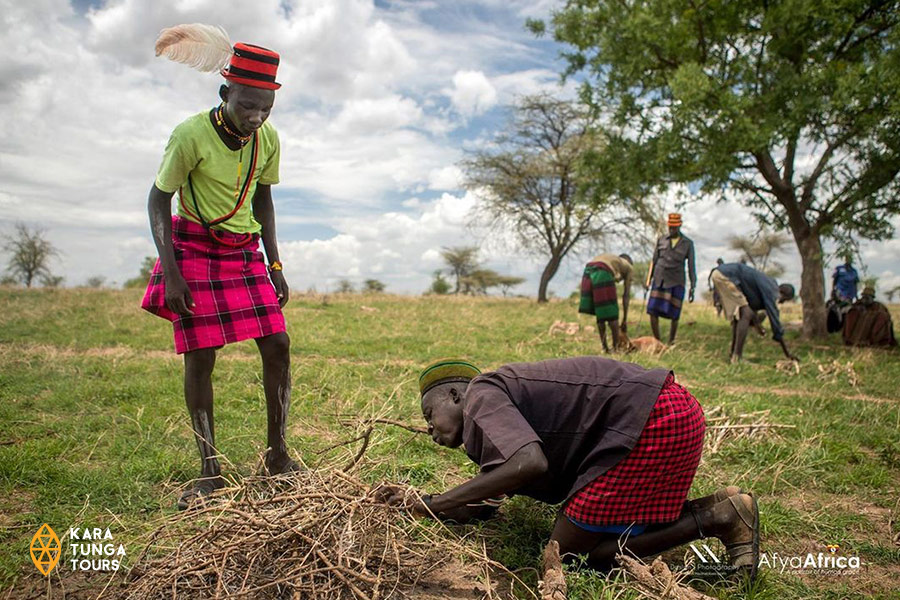 It was a surreal experience sitting there watching them stoke the smoldering fire and ready it to receive the sacrifice they were about to make. I felt apprehensive as they approached the sweet little goat about to lose its life. The elders selected the man to spear the goat 3-4 times piercing the animal from the ribs through the lungs into the heart. They waited patiently for the goat to die – by killing the animal in this way, the blood stayed within the carcass. Once the goat was lifeless, they lifted the head of the goat and faced east – they believed that whatever came from this direction was good since they migrated from Ethiopia.

They cut a piece of flesh from between the thighs and roasted it atop the blazing fire, after which an elder tasted it and passed it on to two other elders. Finally, the goat’s blood was removed for the humans to eat! 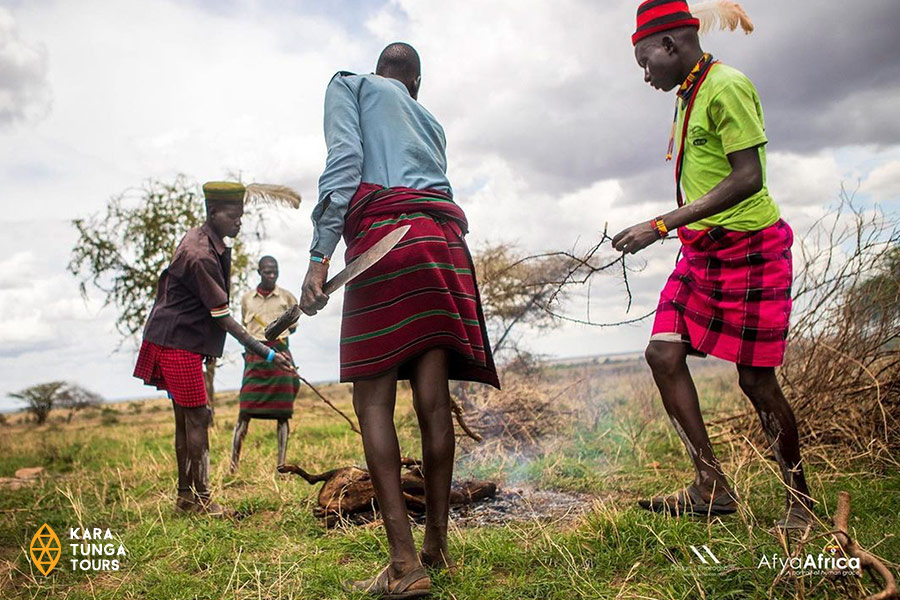 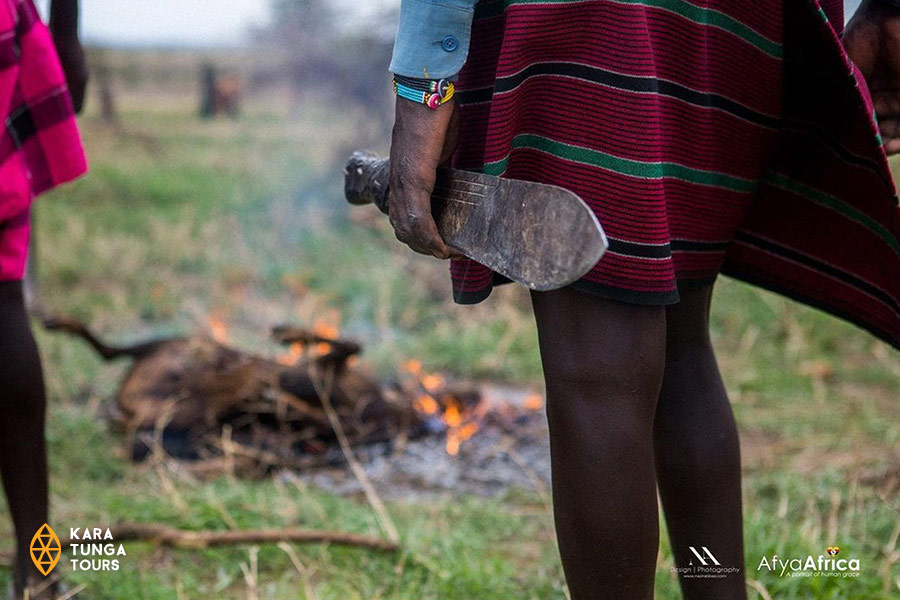 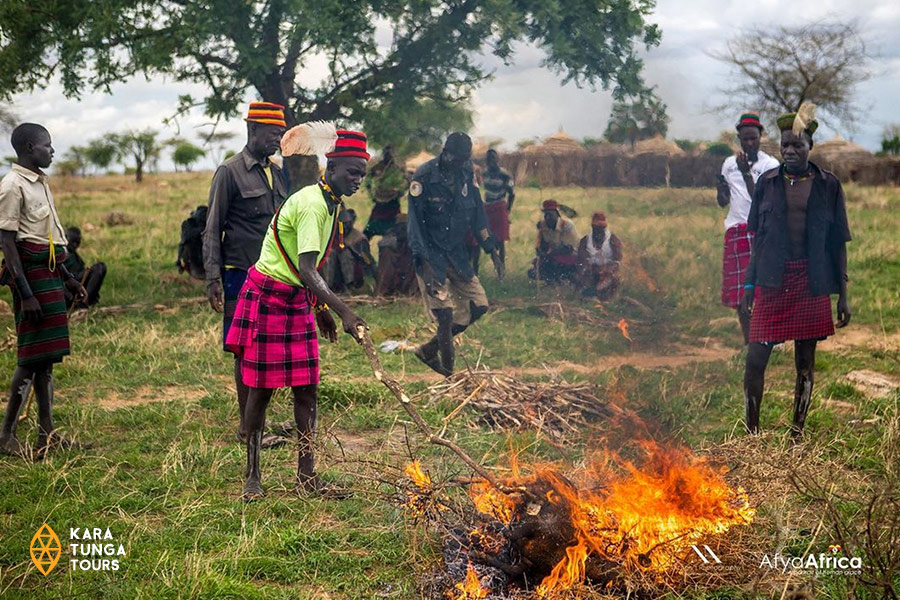 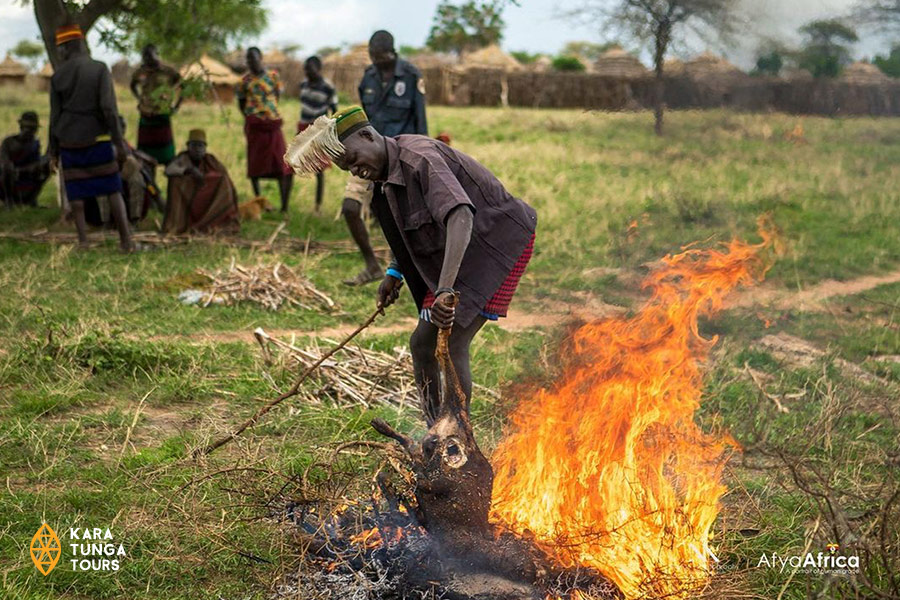 The main elder was the first to consume the clumpy blood, which signifies a celebration of life since blood runs through each and every one of us. When he was done, the others took turns doing the same. At times, they even placed their face within the goat’s abdomen! 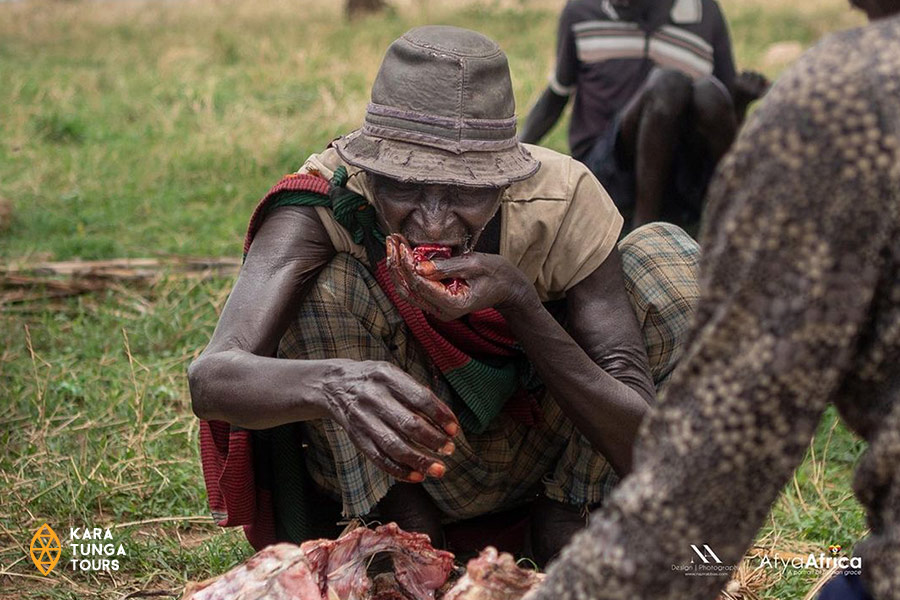 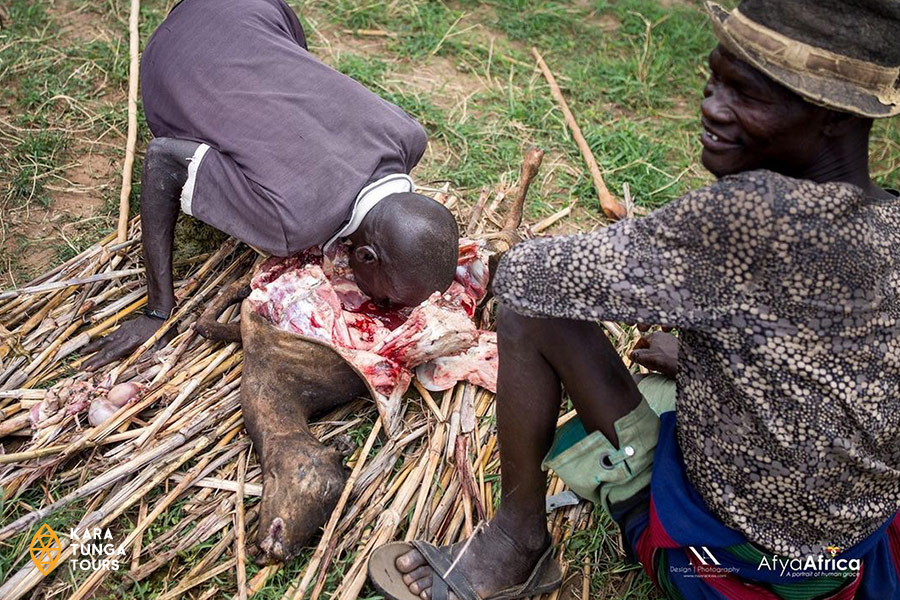 Once the drinking of the lifeblood was complete, the goat was carved into pieces and roasted. The men lined up one after the other to allow the elders to smear the waste from the stomach and intestines onto their forehead and chest, generating positive vibes and good thoughts. I felt a little queasy seeing this, but understood that this was part of their way of life. 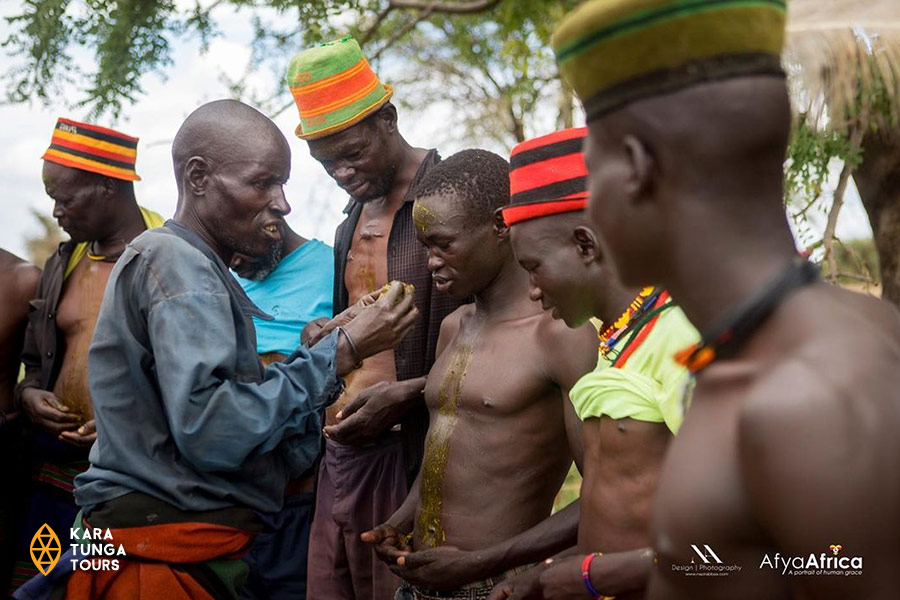 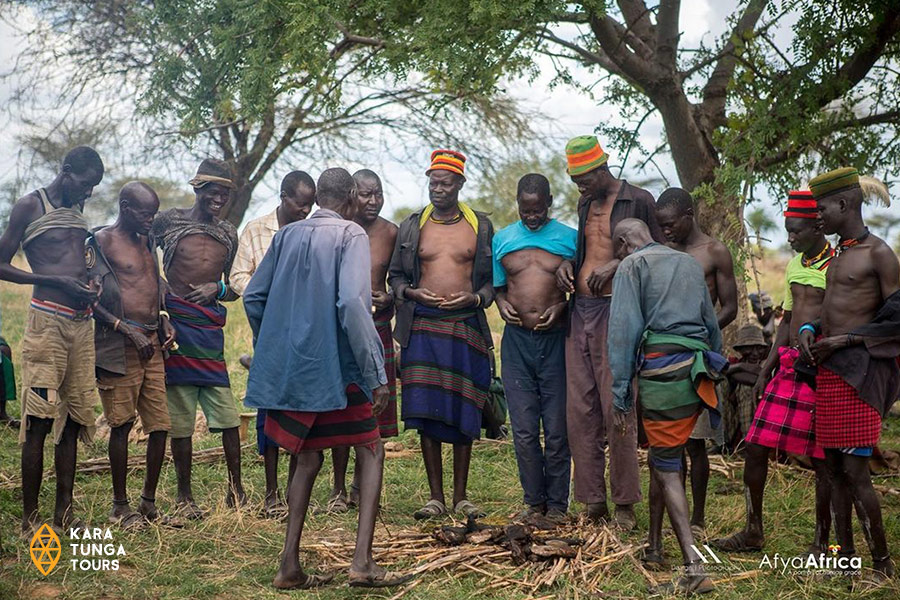 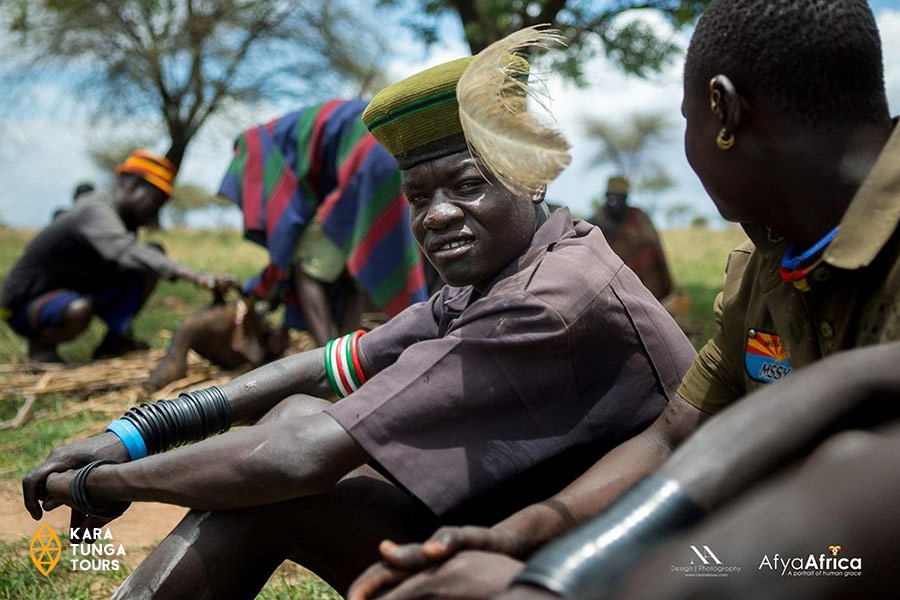 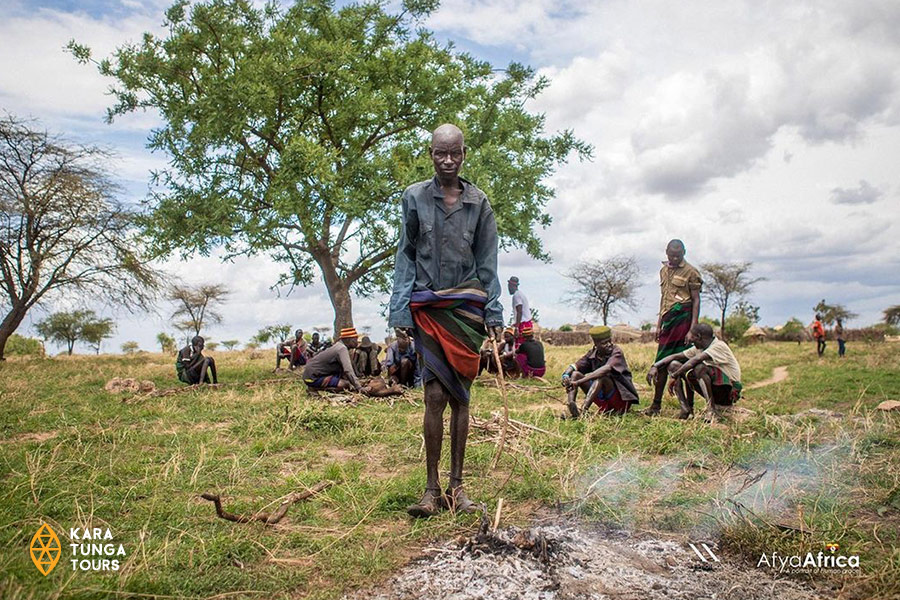 After the waste was applied to their bodies, they joined the semicircle and took a seat beneath the tree. Karamojong believe that this casts away the bad spirits and is a kind of protection and holy blessing. 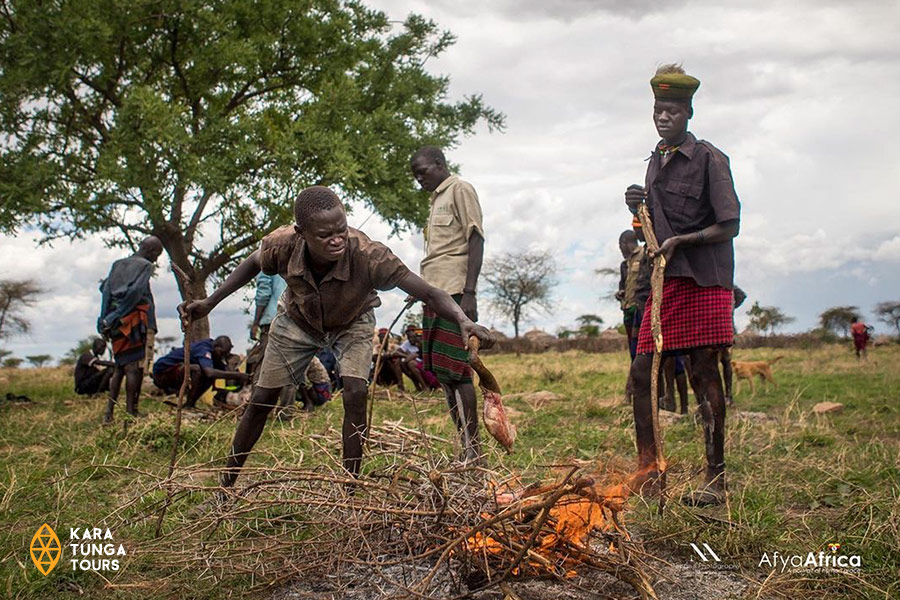 As they finished up this part of the ritual, an outsider arrived, entering a bit late – he was an interesting character and piqued my curiosity. I kept looking at him, and he kept staring at me as I captured his iconic image with my camera. 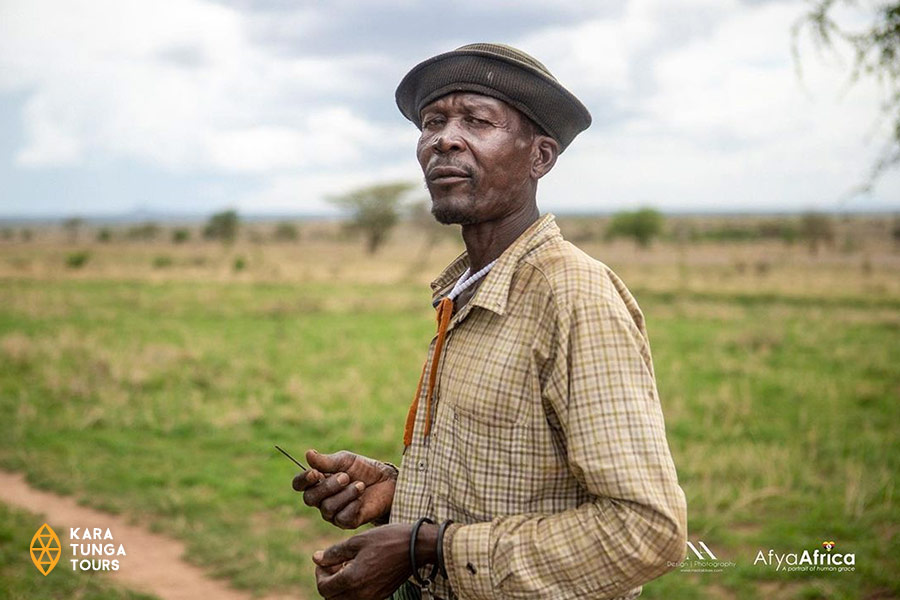