Amudat chapter of Uganda’s Warrior Nomad Trail – The Karamoja region of Uganda is culturally more diverse than communicated in the media. Kara-Tunga aims at showcasing this diversity along the Warrior Nomad Trail with the addition of Amudat district what’s home of the Pokot-tribe bordering Kenya and in between Pian Upe Wildlife Reserve and Mount Moroto Forest Reserve. 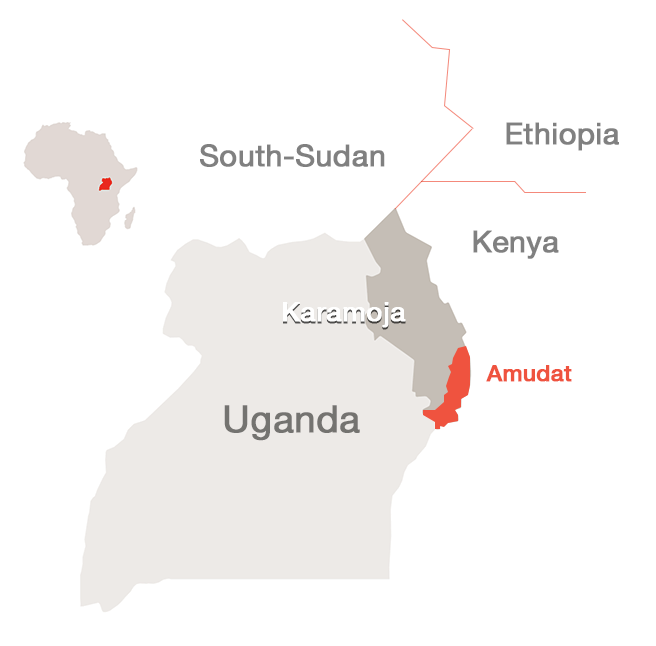 Amudat has – like other districts in Karamoja – a semi-arid climate and is largely covered by scrubs and thickets. Contradictory to neighbouring tribes, the Pokot do not cut trees for commercial charcoal production. They preserve the natural environment mainly for protection of their animals.

Amudat is occupied by the Pokot tribe belonging to the Kalenjin cluster (Ethnic group similar to the Sebei of Sipi Falls and Kapchorwa on Mount Elgon), who are found in both Uganda and Kenya. They depend largely on Pastoralism as their main livelihood. 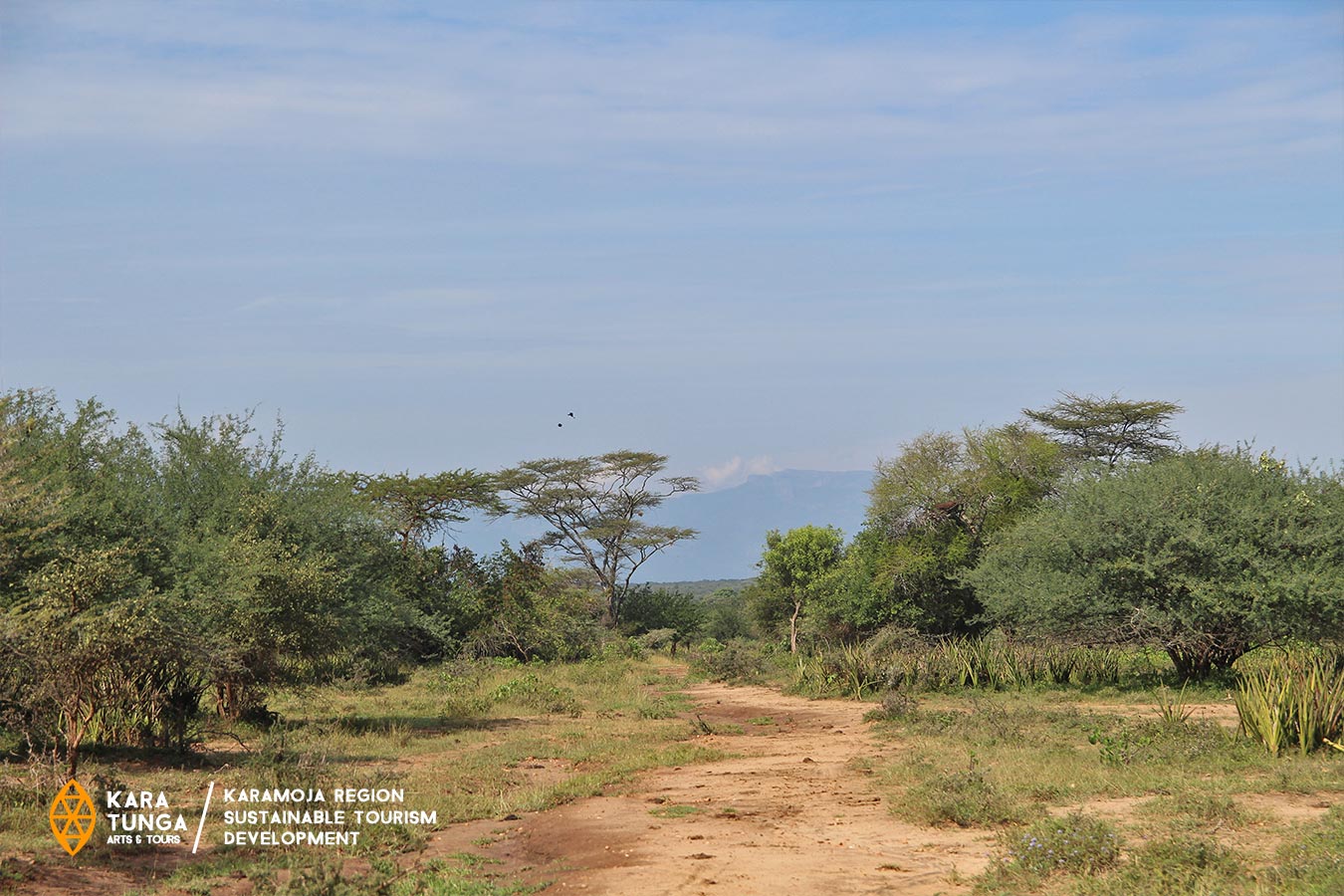 The majority of the people access their livelihoods from livestock and agricultural produce (sorghum and maize). However because of the dry spells and luck of adequate water for livestock, the people led a semi nomadic lifestyle moving even to neighbouring districts in search of main water and pasture.

Pokot women are considered inferior and are involved in the entire house hold work, farming, and apiary, charcoal burning, fetching wood fuel and stone quarrying for their livelihood. Men range with cattle for months in search for pasture and water. Most families are being taken care of by women since men move distances far away from home. 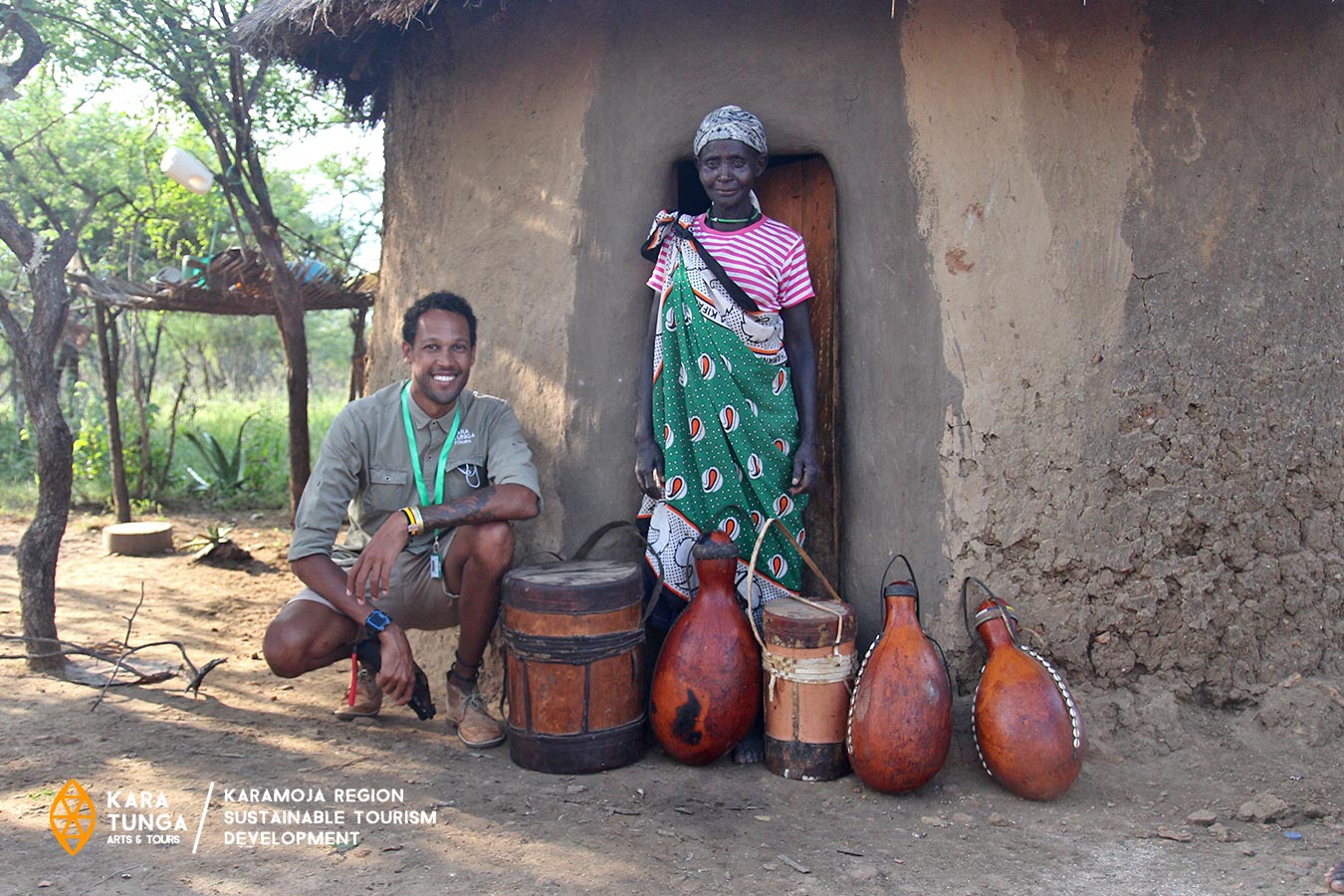 Cross-border conflict between the Pokot, Turkana and Karamojong tribes has been proceeding for decades due to tension over accessing resources such as water and pasture.

In a measure to foster peaceful coexistence among border communities, Presidents Yoweri Museveni of Uganda and Uhuru Kenyatta of Kenya, signed a joint Memorandum of Understanding (MoU) to strengthen cross-border cooperation between Kenya and Uganda in 2019.

Amudat is strategically located along the Eastern route between the popular tourist attractions Mountain Elgon National Park, Sipi Falls and Pian Upe Wildlife Reserve in the South and Mount Moroto Forest Reserve and Kidepo Valley in the North. 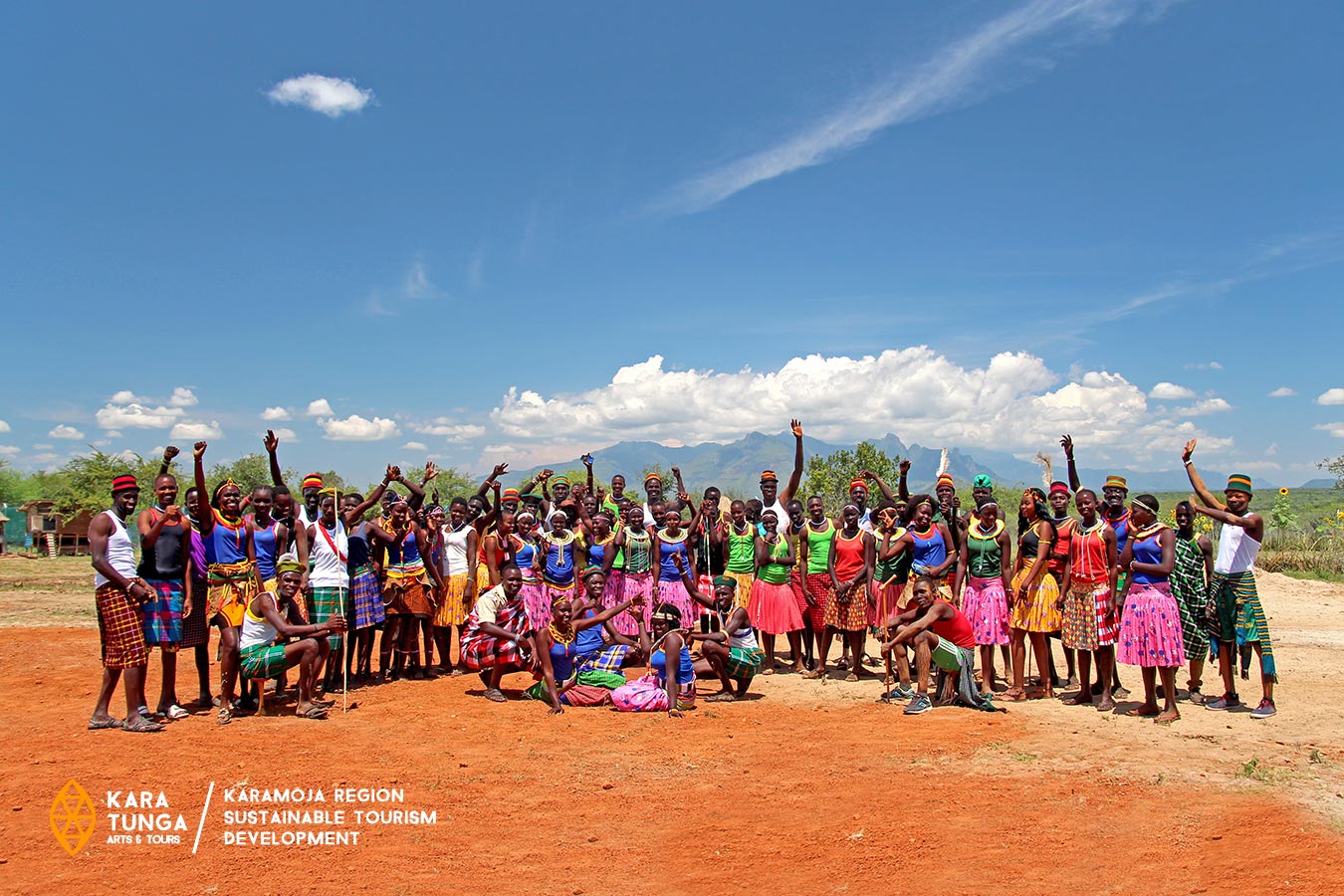 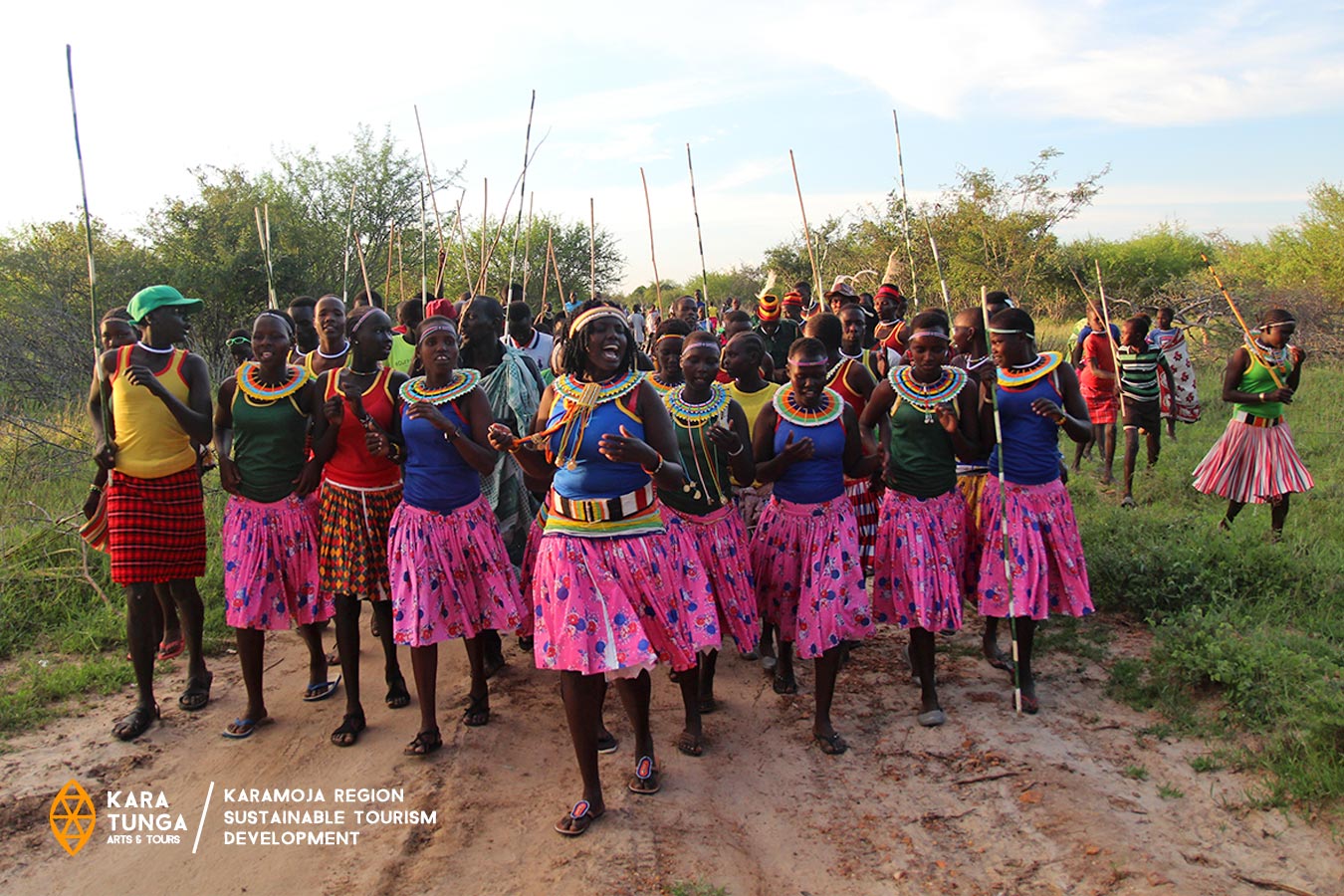 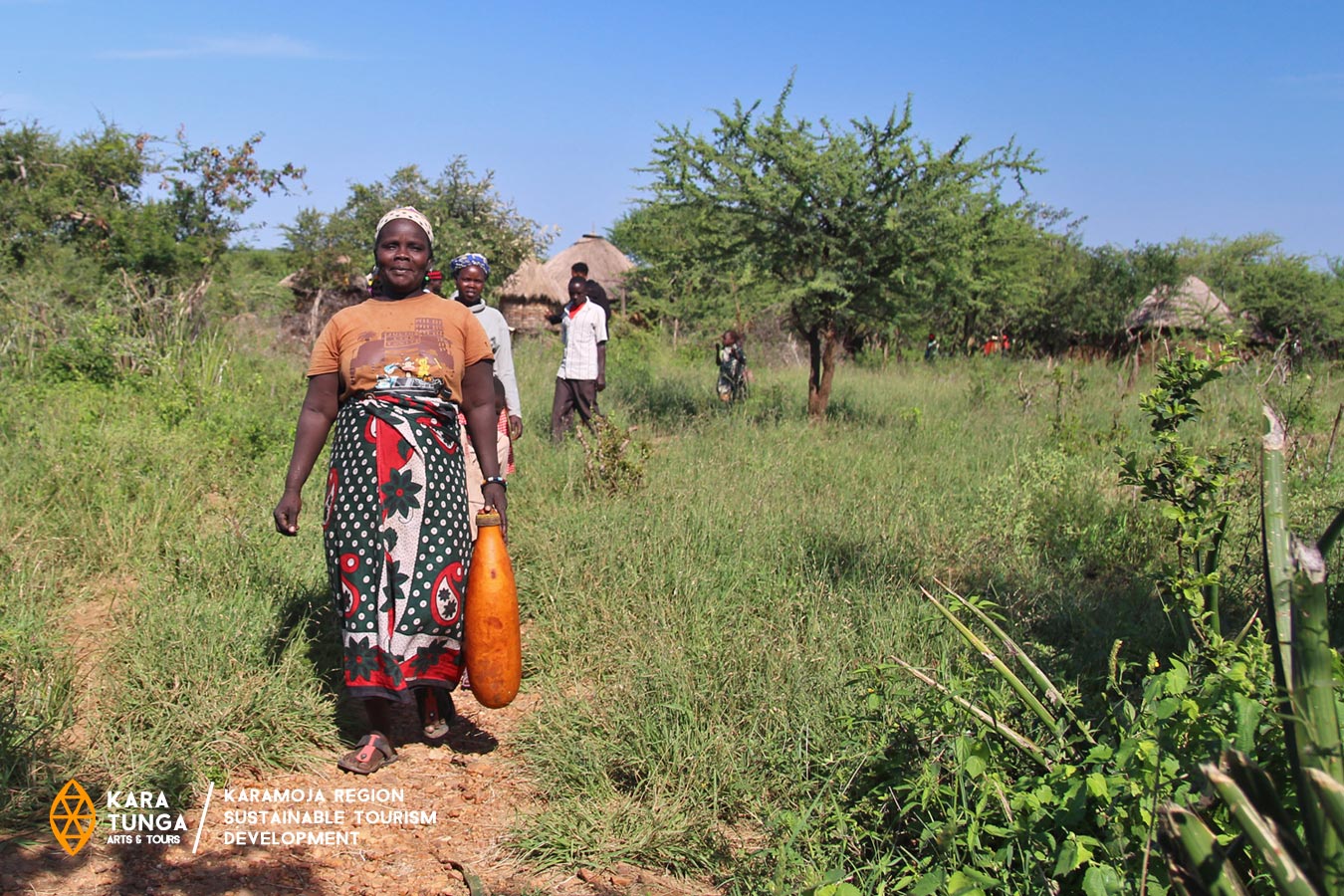 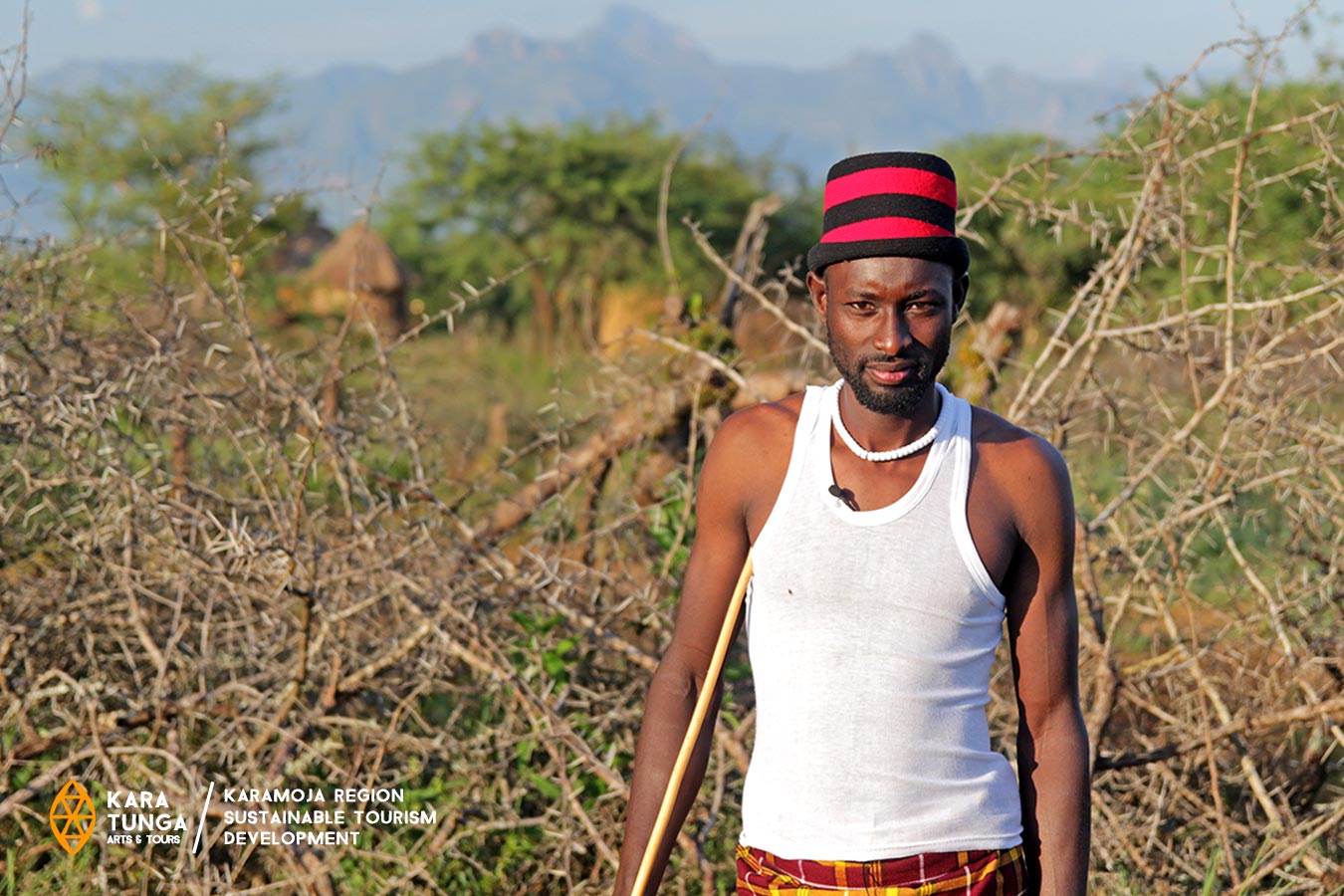 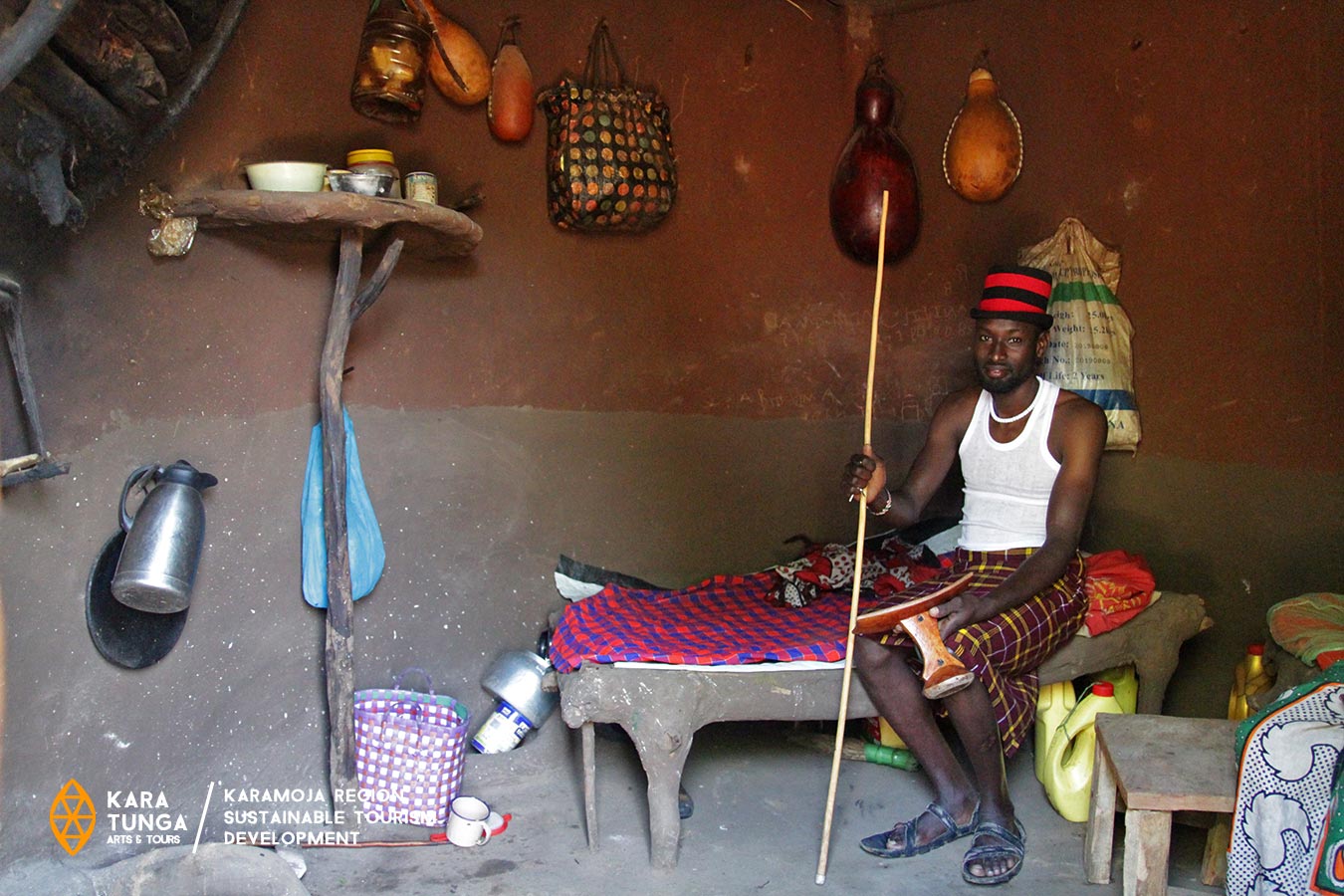 The Pokot belong to the Kalenjin people of the Highland Nilotes who have settled on and around Mount Elgon thats located in Uganda as well as in Kenya. They have preserved their cultural heritage up to today and practice traditional customs like initiations and marriages. The Pokot also developed a rich collection of folklore to pass on a message.

The use of arts and crafts form part of Pokot culture with decorative bead-work worn by women and to decorate gourds made from calabashes to store and preserve foods.

The volcanic massive called Mountain Kadam Forest Reserve is located in the South of Amudat and creates a natural border with Pian Upe Wildlife Reserve. The mountain stands 3Km above sea level and is suitable for nature walks and multi-day treks for travellers with different levels of experience and needs. 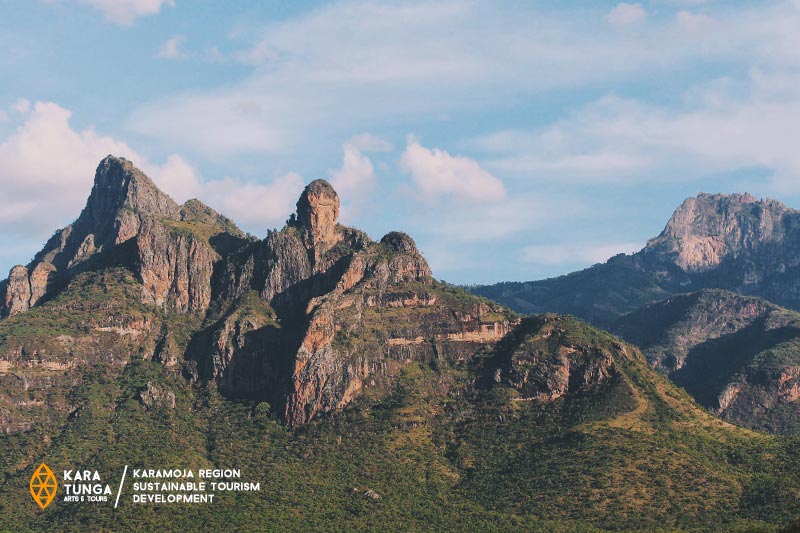 The Kalenjin are famous for producing world’s best runners. From 1980 on, about 40% of the top honours available to men in international athletics at these distances (Olympic medals, World Championships medals, and World Cross Country Championships honours) have been earned by Kalenjin.

Amudat has only two operational basic guesthouses that can host backpackers and budget travellers but can’t answer the demand of mid-range travellers. There’s a new initiative at 15Km from Amudat trading centre that aims to bridge this gap in the nearby future. 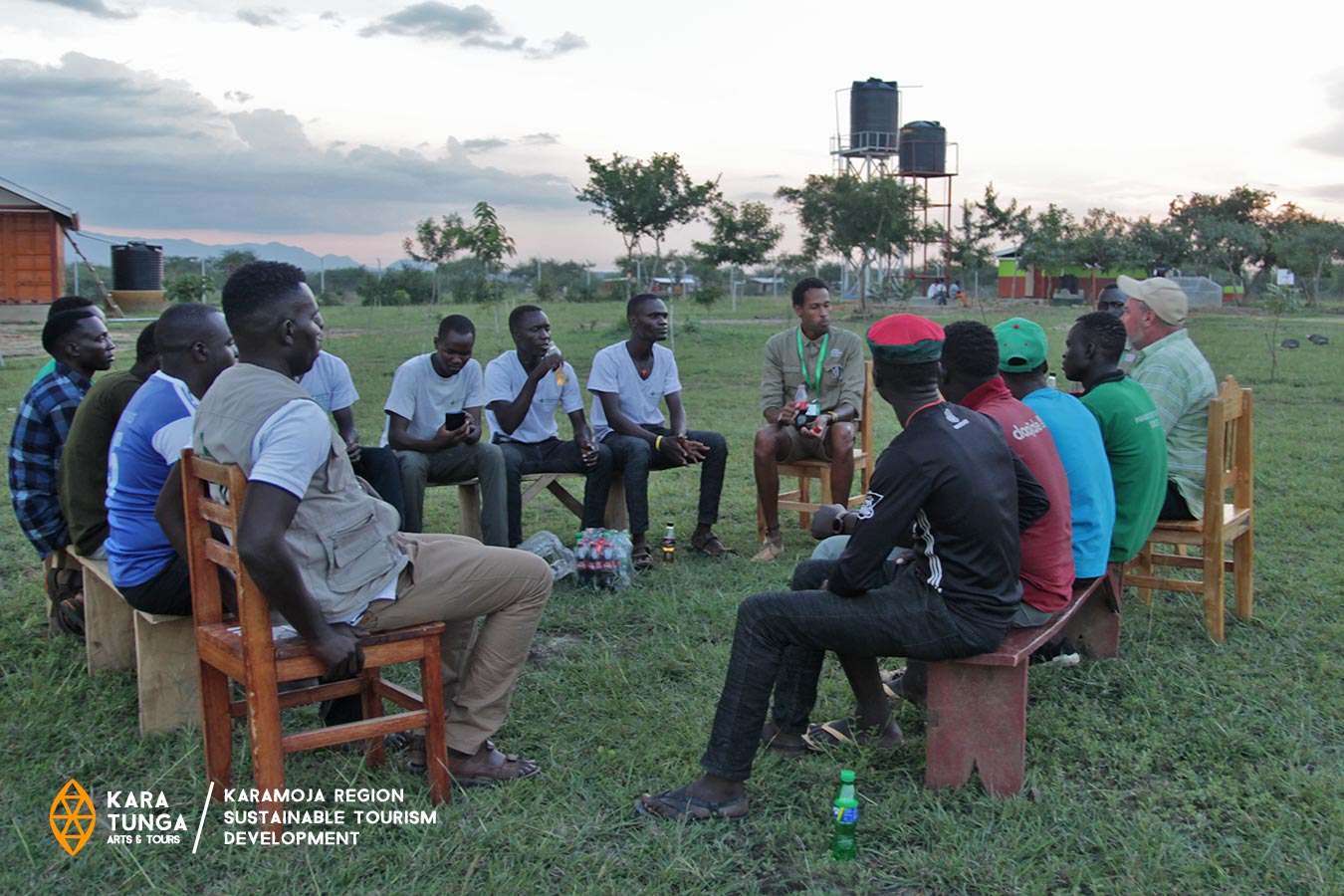 Kara-Tunga is seeking for partnerships in designated areas of the Karamoja sub-region in Uganda to develop an authentic cultural and outdoor adventure trail aimed at job creation and preservation of cultural heritage. This network of partners create the Warrior Nomad Trail.

Kara-Tunga Karamoja Tours has partnered with Kalia Peace Village in Amudat and has committed to build capacity of their team in tourism and hospitality through internships and participation in training opportunities at Karamoja Tourism Academy related to the Warrior Nomad Trail initiative. 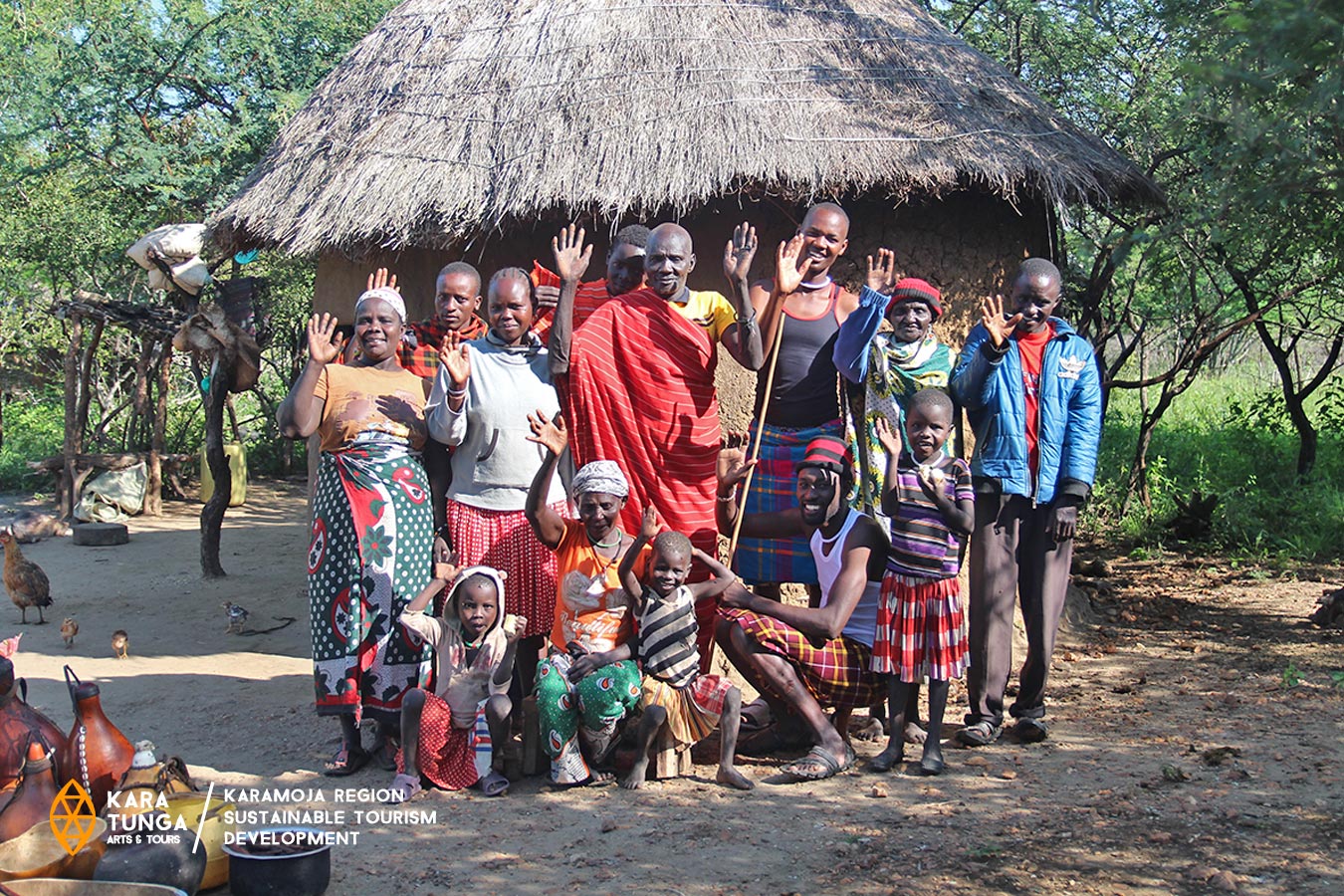