It’s such an honor to receive a special recognition by Ekkula Pearl of Africa Tourism Awards for doing the unthinkable and spearheading the development of tourism to our region aimed at improving livelihoods of our communities.

This recognition goes entirely to Kara-Tunga, Karamoja Tours family and partners who are tirelessly working towards a regenerative regional tourism sector in Karamoja.

What is Ekkula Tourism Awards Uganda?

The annual Ekkula Tourism Awards Uganda (Ekkula a Ugandan word that means ‘treasure’), coalesced the who’s who of the Ugandan Tourism Industry, including the government of Uganda.

This week we reflect on Theo, the founder of Kara-tunga a social enterprise that is uniquely rethinking tourism in Karamoja and fostering inclusivity; and conservation by creation of alternative livelihoods through tourism.

Theo developed destination Karamoja from the grassroots to offering over 26 community tourism activities.

He has rendered over 70 international publications including the first Karamoja destination promotion film, graduated 435 youth in his tourism Academy, with a network of 25 skilled site guides, 17 community groups representing 600 families and has hosted 5,000 tourists over its 6 years of existence. And even with this impact, to him, the journey has just begun.
Kara-Tunga recently launched it’s nonprofit Foundation aimed at increasing its impact and manage their developmental activities like the annual Tour of Karamoja Bicycle Event, Kara-Tunga, Karamoja Tours Community Tours, Karamoja Tourism Academy, Ateker Trail Tourist Trail and Karamoja Conservation Zones initiatives.

Kudos Theo 👏👏👏👏👏you are without a doubt worth acclaim, our Karamajong champion. ”
Thanks to Uganda Tourism Board-UTB, Explore Uganda, Uganda Wildlife Authority and MINISTRY OF TOURISM, WILDLIFE AND HERITAGE. 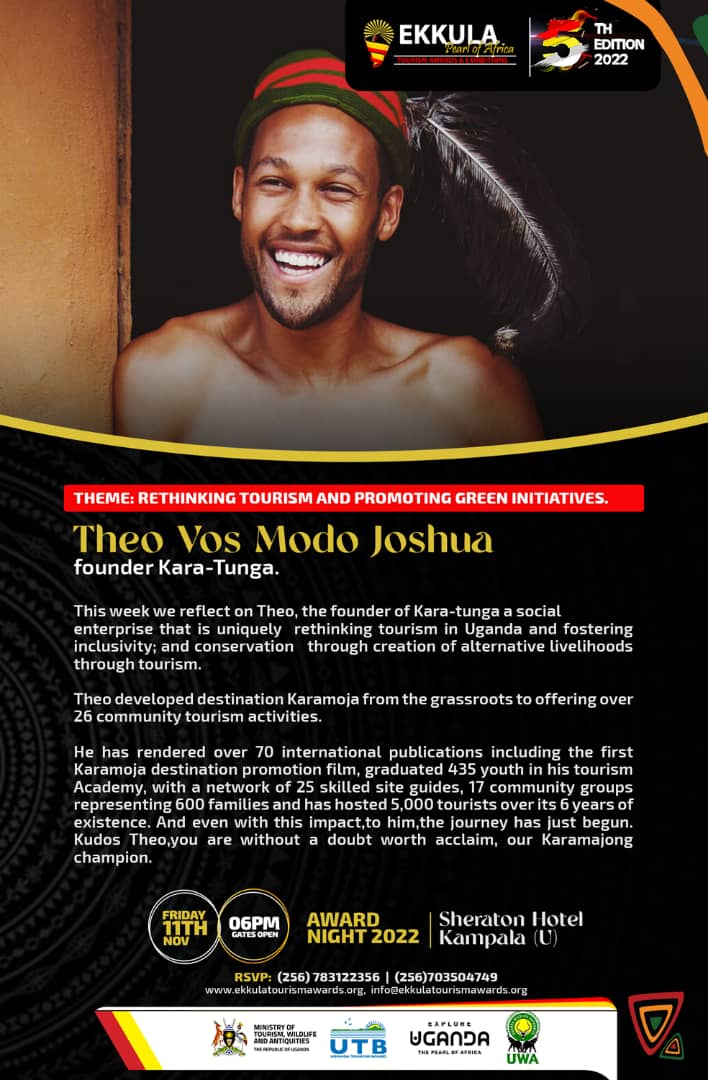